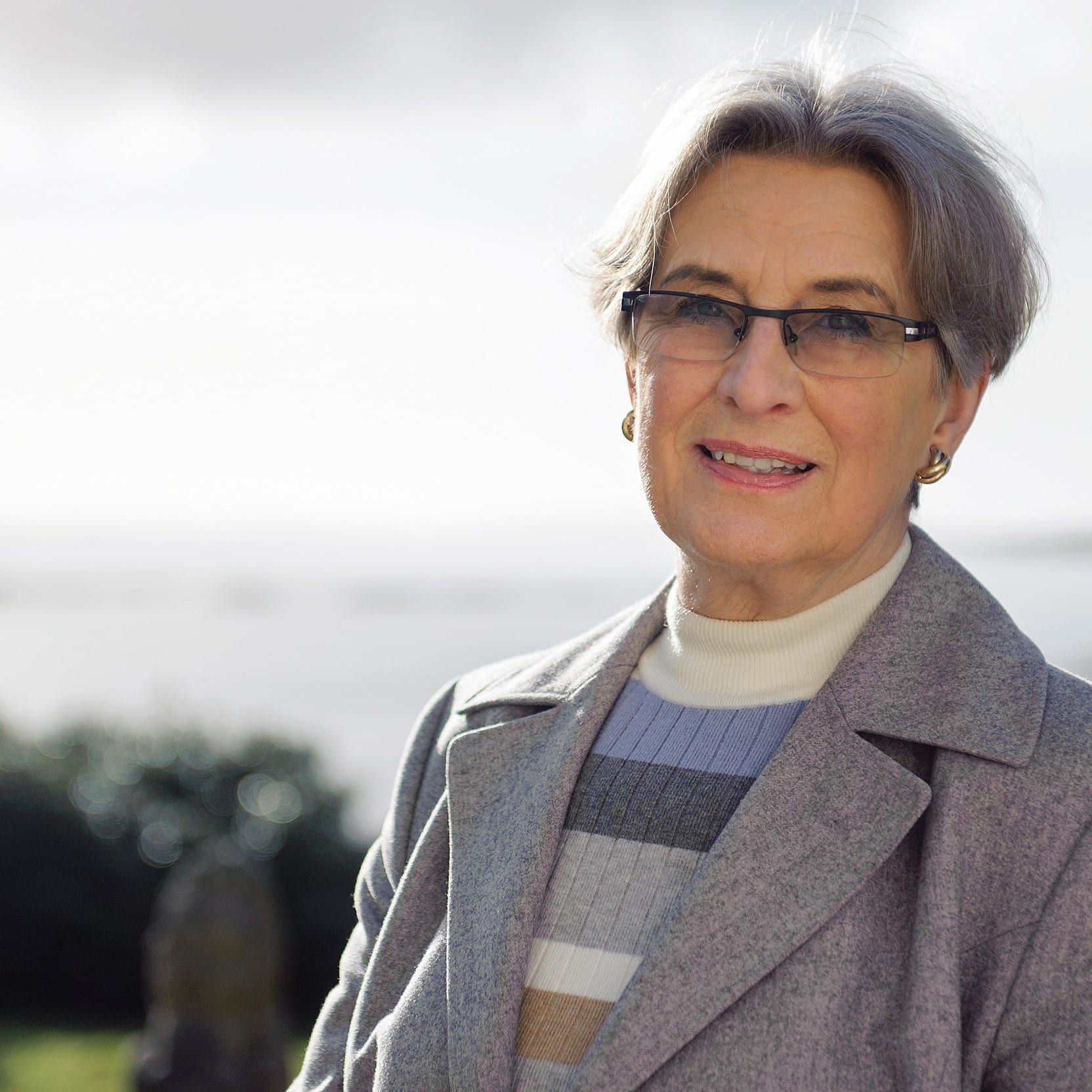 Ann Henning Jocelyn was born in Gothenburg, Sweden, in 1948. After her father’s death just after her birth, her mother took her three young children to live with her own parents in Ed: a winter resort famous for its natural beauty, remotely situated in the province of Dalsland, on the Norwegian border.

Ed was “a haven of childhood serenity”. Ann thrived. At the age of four, she was reading; aged five, she typed out her first story. But the idyll was shattered shortly after her sixth birthday. Her grandmother died suddenly, and her grandfather passed away a few months later. Her mother took the children to live in Molndal, outside Gothenburg, remarried and set about building a new life for herself and her family.

For Ann it was a difficult time. She pined for the life they had lost. At school she was unpopular with teachers for being too far ahead and bullied by other children. She escaped into writing, producing her first childrens’ book, ‘Honeylove The Bearcub‘, aged seven. (It was published exactly forty years later in Ireland, by Poolbeg Press). At nine, she had a story accepted by a magazine, and she discovered that, by writing plays to entertain the other children at school, she was able to placate even the worst bullies.

At second level she excelled and rebelled in equal measure. Her teachers advised her to aim for medicine, but one year before her matriculation exam, she did a U-turn and dropped the Natural Science subjects in favour of Classics. She finished school with top results but no inclination to go on to further studies. Only after a near-fatal car crash followed by a long convalescence, did her interests crystallize.

In 1968, she enrolled at Gothenburg University for a Bachelor of Arts degree, specializing in Classical Architecture and Drama. Having received her Honours degree, she was appointed Junior Lecturer in Art History at Gothenburg University: a post she held for exactly one term, before deciding that it was too early for her to settle into an academic career. Instead she went to London to further her theatre studies and spent two years at drama school Studio 68 learning professional skills. On leaving, she was employed by the Open Space Theatre in London, working with the legendary director Charles Marowitz as his assistant and dramaturge. She also appeared in several productions at the Open Space, although she was not too keen on acting: her best work was done away from the spotlight.

Around this time she wrote her first stage play, ‘Smile‘, about a dying rock star. It was premiered in her home town of Gothenburg in 1972, but rejected as politically incorrect. In the Swedish theatre climate prevalent at this time, plays had to deal with the underprivileged, not the wealthy and successful. Disillusioned, she returned to London.

A period of hardship followed, with odd stage and film appearances, but then she realized that she had a comfortable career within reach as translator of novels, films, and plays. She added a degree in English to her academic credentials, and within a few years was well established, introducing leading authors like Ruth Rendell, Joanna Trollope and Kazuo Ishiguro to Swedish readers. Contact with Swedish publishers also led to a year-long commission to collaborate with film star Ingrid Bergman on her autobiography, ‘My Story‘, and to commissions for non-fiction.

In the U.K., she became Chairman of the Translators’ Association and served for two terms on the Committee of Management of the Society of Authors, representing Britain at international authors’ conventions including the Congress of European Writers’ Organisations.

Early on in London, she had made the acquaintance of a young Irishman, who spoke fondly of his home in Connemara, on the West Coast of Ireland. In 1982, she went to stay in his house in order to work in peace. The idyllic setting, the magnificent scenery and the quiet pace of life reminded her of Ed: it felt like coming home after a long absence. Today she is still there, living in the same house, together with the owner, whom she married. Their son Shane was born in 1989.

Her husband came from an ancient Irish family, descending from one of the original Knights of St. Patrick, and Ann found a use for her art historical background in helping to preserve the rich cultural heritage. As wife of the tenth Earl, she is known officially as Countess of Roden.

Some adjustments had to be made for her to fit into her new culture, but one thing she shared unconditionally with the people of Connemara: her love of horses. The beautiful ponies, for which the region is renowned, soon became part of her daily life. She discovered a new talent: the ability to tame, break and train ponies used to semi-wild conditions on the mountains. A training centre was set up to help local breeders add value to their ponies before offering them for sale on the export market.

The work on behalf of Connemara pony owners, initially intended to provide a diversion from writing, led straight back to the books, as she was commissioned by Poolbeg Press to write a work of fiction about life in pony circles in Connemara. ‘The Connemara Whirlwind‘, with her own stallion Cuaifeach as chief protagonist, went straight to the bestseller list, was sold in five countries and chosen to represent Ireland in UNESCO’s International Youth Library. With its two sequels, ‘The Connemara Stallion‘ and ‘The Connemara Champion‘, it is read in Irish schools and appreciated by people of all ages. In 1995, Poolbeg also published ‘Honeylove The Bearcub‘, based on abook she had written aged even.

The only thing Ann Henning Jocelyn ever missed in Connemara was the theatre, and in 1997, during her appointment as Artistic Director to the 4th International Women Playwrights’ Conference at University College Galway, she set up the Connemara Theatre Company together with fellow playwright Maire Holmes. The inaugural production was ‘Baptism Of Fire‘, a comedy written by Ann during a period of renewed tragedy and trauma in her family. It kept audiences laughing in Clifden and Galway, and was later produced in Pernik, Bulgaria. Another of her plays, ‘The Alternative‘, dealing with the delicate issue of child abuse, was produced by the same company and shown nationwide in 1998. More recently, her English translations of contemporary Scandinavian playwrights Jon Fosse and Henning Mankell have won much acclaim. The Luminous Darkness: The Theatre of Jon Fosse by Leif Zern was translated by Ann Henning Jocelyn, and published in 2011 by Oberon Books, who also publish her Fosse translations..

Over the years, Ann had done much broadcasting on Swedish radio and television, and in 1998, her two-hour radio show in the SOMMAR series lead to numerous requests for lectures, and in 2008, another edition of this program, presenting her view of Ireland, was heard by an estimated million Swedish radio listeners. In Ireland and Sweden, she presented her “Thoughts for the Day” on radio for many years. A collection of these poetic reflections entitled Keylines, published by Doonreaghan Press in October 2000, has been translated into a many languages, including Chinese. Multi-lingual since her early teens, Ann was able to collaborate on Swedish, German and French versions. An extended volume. Keylines for Living, was published by O-Books in 2007.

Her stage play Doonreagan, about Ted Hughes and his lover Assia Wevill, had its world premiere at Jermyn Street Theatre, London, in 2013, before touring the UK and Ireland. The play is now set to become a feature film,with Ann writing the screenplay. The critically acclaimed Only Our Own was shown in 2014 at the Arts Theatre in London’s West End and had a second production in the UK and Ireland the following year. W – The Truth Beyond, a new Swedish opera about Henning Mankell’s detective Wallander, was performed with Ann’s English libretto in Germany and Sweden in 2015. Her new play, The Sphere of Light, was presented at the Howard Theatre in Cambridge on July 1st, 2017 and at the Clifden Arts Festival two years later. She has also written a novel on the same theme.

Ann’s English versions of various Scandinavian plays are produced regularly in the English-speaking world. Her latest commission was to write an English version of Camera, a new musical about her old friend, film star Ingrid Bergman. She has also been busy writing screenplays for movies, but with film productions suspended due to Covid restrictions, she spent lockdown writing Life Harvest, Words of Wisdom: a digital/audio book available on her website.

We use cookies to ensure that we give you the best experience on our website. If you continue to use this site we will assume that you are happy with it.AcceptPrivacy Policy