In all that has been written and published on Ted Hughes, very little ink has been wasted on a major interest of his: that of astrology. Apart from the oblique reference to his “dottier beliefs”, critics and biographers have shied away from the subject, presumably out of fear of being seen as taking it seriously. However, we know for a fact that Ted Hughes had a serious commitment to astrology. To ignore an element that formed an essential part of his self-image, his approach to life and his attitude to other people, leaves a gaping void in our insight into him and his work. Without acknowledgement of this aspect of his mindset, Ted Hughes’ inner self can never be fully understood.

Still – few things elicit such fierce hostile reactions as the mere mention of the word astrology. A few months ago, the Irish Times ran a feature categorically dismissing astrology as utter nonsense and deriding anyone taking an interest in it. I couldn’t resist writing a letter to the Editor, pointing out that, by definition, the article defined people like Carl Jung, W.B. Yeats, Louis MacNeice and Ted Hughes as misguided fools. Needless to say. my letter wasn’t published.

The problem with astrology is that it takes thorough and profound study over many years to bring you to stage where you can have a view on the subject. Popular opinion is invariably based on uninformed prejudice, made worse over many centuries by innumerable charlatans making capital out of it. In ancient times, it was the reserve of a few selected wise men. If only this had remained the case, much misconception would have been avoided. Even five hundred years ago, Johannes Kepler complained about the misuse of astrology for fortune-telling, as opposed to character analysis, and a century later, mocked by a fellow-scientist for giving any credence to it, Sir Isaac Newton famously replied: “Sir, I have studied the subject. You  haven’t.”

So how do we know about Ted’s involvement in astrology? Well – first of all, we know that he studied it to the point of proficiency, under the guidance of his sister. Among early letters to Olwyn, some contain direct and detailed references to planetary conditions. His interest is likely to have been further boosted by his reading of W.B. Yeats. And, knowing how complex and demanding such studies are, I can testify that no one would undertake them without being seriously motivated. Conversely, I doubt that no one who has studied the subject in depth could have anything but respect for it, as such studies invariably bring up revelations and co-incidences that cannot be logically or statistically explained.

To begin with, Ted was cagey about his interest in astrology, aware no doubt that any such admission would damage his credibility. His review of Louis Macneice’s book Astrology in 1966 takes great care not to reveal his own connection with the subject. Not until the publication of Birthday Letters in 1998, the year of his death – incidentally, on a date carefully planned by Hughes – did he, as it were, come out. The poems St. Botolph’s, 18 Rugby Street and Horoscope make no secret of his astrological knowledge. Interestingly, no critic picked up on this. Even Ariel’s Gift, the two-hundred–page literary companion to the poems by Times critic Erica Wagner, studiously makes no mention of the fact.

As it happens, I can add a personal testimony. In the mid-nineteen seventies, as I was working on a five-year commission to write a book called Modern Astrology, a definitive treatise on the subject, I was approached by an acquaintance asking me to see a friend of hers who wanted to discuss an astrological matter. I made clear that I was not in the business of reading charts, but she insisted and turned up with a beautiful blond, buxom Australian woman, who told me that she was in a relationship with a man who, however, was married and, though he spent the weeks with her in London, he insisted on going back to his wife in the country at weekends. Now he had asked for the exact time and place of her birth, and since she knew that he avidly practiced astrology, she realized he would be examining her chart. As she realized that his findings would have a bearing on their future life together, she wanted me to tell her what he might see in her chart. Out of sympathy I interpreted her chart and also that of her partner, comparing one against the other, looking out for conflict versus compatibility, which is what I presumed he would be doing. I remember the outlook was not very hopeful. As she left, she revealed the identity of the man: he was Ted Hughes. Her own name, familiar from Ted Hughes biographies, was Jill Barber.

The reason why astrology should appeal to poets is plain to see: it describes human life in terms of symbols – symbols so archetypal, they have remained largely the same for over seven thousand years. Overriding any faith, orientation or ideology, the astrological method of defining the human condition symbolically sums up all that we as human beings have in common – regardless of external conditioning. Used as such, as an aid to bring us closer to our own basic humanity, it has a deep affinity with poetry. Indeed – I find it surprising that not more poets make use of these ancient images to help them delve deeply into the human psyche, challenge conscious thought, nourish imagination and explore a moral, spiritual dimension to life. I would go as far as to say that there needn’t be any substance to astrological claims – as a method it still has a lot to offer.

Because of its universality, astrology can easily be adapted to any period, location, culture or social environment. What is nowadays referred to as “modern astrology” – the version Ted Hughes is likely to have subscribed to – is in full agreement with prevailing western philosophy. Rejecting any suggestion of fate or inevitability, it maintains that we are all fully responsible for our actions: it is entirely up to our own free will how we choose to handle the equipment, with which we were born: equipment that show the same traits, whether described by genes and DNA or by cosmic conditions prevalent at our birth. 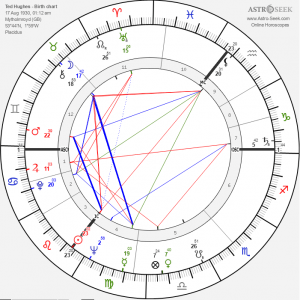 So what does Ted Hughes’  horoscope tell us – or, more pertinently, what did it tell him? How did it help form his own idea of himself and people close to him, and how did it affect his responses to major events in his life?

Well – this is a graphic depiction of the sky at the moment of Ted’s birth. An important part of interpreting a chart is to measure the angles formed between the various planets, using the Earth as the point of intersection. If an angle amounts to certain fixed degrees, this is called an aspect, each of which has its own significance. Here, the first thing an astrologer would notice is this: in technical terms, four planets lined up at right angles or 180 degrees to each other. You can all imagine the statistical likelihood of this occurring. Called a Grand Cross, it is the rarest of all planetary configurations. In forty years of studying many hundred charts, I have only come across it once or twice. Perhaps it was the uniqueness of this horoscope that first fired both Olwyn’s and Ted’s interest in astrology.

A Grand Cross is not something you wish to see in a horoscope. It has been described as a heavy cross to bear, a pervasive inner darkness. Appearing in so called Cardinal signs, as here, it can also be destructive. So how did Ted feel about that? It has been found that, whatever it throws up,  most people have a peculiar fondness for their own chart, rather as you have for your own hand-writing. According to astrological theory, all human traits have both positive and negative poles, and it’s up to ourselves to control them. Since a Grand Cross is a real powerhouse, the dynamic energy it generates can be used constructively, and then often with great success.

To mitigate challenging aspects, one should also look for more favourable points of balance, such as this arrow-point here. The Sun, Moon and Pluto are all well placed, signifying a happy early childhood and a talent for self-expression likely to impact on others. Jupiter and Pluto together close to the horizon at the moment of his birth suggest a literary outlet. It all ties in with the words of the late Keith Sagar: “Every work of art stems from a wound in the artist’s soul. Art gives expression to the healing process.” And Ted himself has referred to poetry as revealing something that the writer doesn’t actually want to say but desperately needs to communicate.

Ted may have used his chart as an excuse for his dealings with women. His Venus, representing emotions, is badly afflicted, part of the Grand Cross, and as for sex, a totally unaspected Mars in fickle Gemini marks him down as unfit for sustained relationships.

Which brings us to the chart of Sylvia Plath. 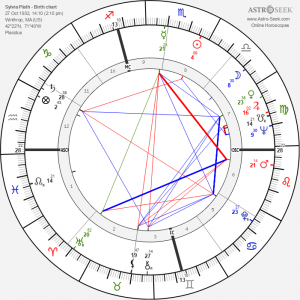 And what is the first thing we see here? The second most ominous sign after a Grand Cross: the T-Square, which has three planets lined up at right angles to each other. And in cardinal signs, just as in Ted’s chart, replicating the same signs!

We know that Ted examined Sylvia’s chart at an early stage. He must have been struck by these amazing similarities. Perhaps that’s what attracted him? Both haunted by their inner demons, they sought a release through poetry. Though the combination compounded their own conflicts, at least they understood each other!

Sylvia’s release, this arrow here, is close to the western horizon, suggesting a dependence on other people’s approbation, unlike Ted’s on the eastern horizon, giving him no problem asserting himself.

When it comes to Assia Wevill, I can’t show her chart, since her time of birth is not known. However, astrological tables still tell us a great deal. For example, Ted would have recognized signs of great charisma in Assia’s chart, combined with strong passion – and also an obvious lack of reason, substance and stability, which may all have appealed to him. Her Venus, ruling emotions, is afflicted in Gemini, indicating multiple partners, and Ted can’t have failed to observe that her Venus is in exactly the same sign and degree – one chance in 360 – as his own fickle Mars. He may have hoped that the violent attraction produced by this bond would be enough to overcome the volatility of them both?

The most unusual chart of all – something I myself have never seen the like of, nothing but straight lines and diagonals – was little Shura’s chart. Ted had her chart drawn up by a professional astrologer shortly after her birth. Did he not trust himself to be objective, or was he worried enough by what he saw to seek a second opinion? He kept the astrologer’s report, which quotes: “a lot of fantasy, pretence, deception… A hell of a chart… not very promising. Severe loss within the family through death or accidents.”

One of the most inexplicable things about horoscopes is that astrological traits are often inherited. For example, Nicholas Hughes’ chart shows remarkable parallels to those of both Ted and Sylvia. (Freda’s chart I have, out of courtesy, not examined.) In Shura’s chart, though there are obvious links to Assia, there is hardly anything reflecting Ted’s planetary positions. We can only speculate as to his reading of this horoscope.

In conclusion, I have no doubt that these observations played a major role in Ted Hughes’ consciousness. How much of it has any real application I leave to each of you to decide.

Beyond Words - Translating for the Theatre

Next
We use cookies to ensure that we give you the best experience on our website. If you continue to use this site we will assume that you are happy with it.AcceptPrivacy Policy